History: Four small fragments were found buried adjacent to a circular depression by two local residents using a metal detector. The circular depression was subsequently confirmed as a 36 m diameter Late Holocene impact crater based on morphology, identification of impact ejecta and crater fill, and presence of impact melt (C. Herd and D. Froese, University of Alberta), and further fragments were recovered.

Physical characteristics: The meteorite consists of 74 samples with a total mass of 5372 g. The samples were found buried up to 25 cm and have a red-brown exterior.

Petrography: (C. Herd, University of Alberta, UAb) Widmanstätten pattern with an average bandwidth of 0.8 ± 0.2 mm and areas of plessite are evident on polished and etched surfaces. Locally, kamacite lamellae are coarser and taenite lamellae are offset as a result of shock deformation and recrystallization. Rare Fe-Ni phosphide inclusions are present.

Type specimens: A total of 2.4 kg is on deposit at UAb. The remainder of the known material is held by the anonymous finders. 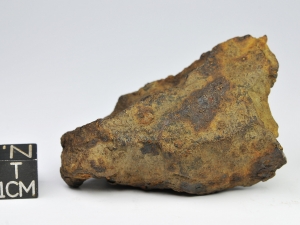 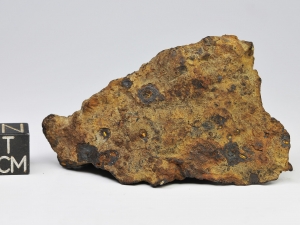 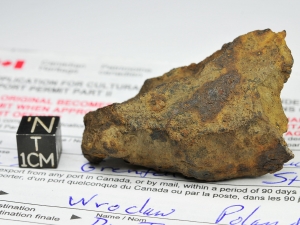 Whitecourt 99.1g IIIAB
[ You may contact me directly at illaenus@gmail.com ]